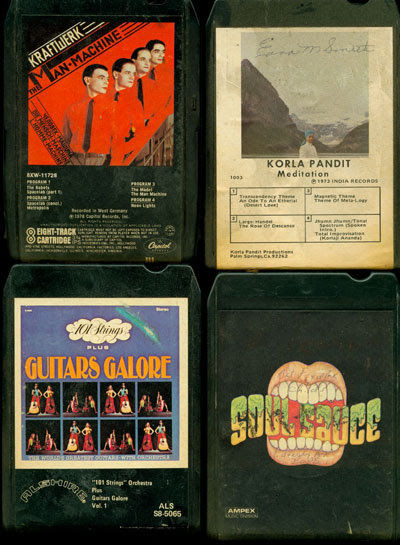 Posted by Peteykins at 6:31 AM

Eight-track tapes - so satisfying. The big labels. The satisfying *thunk* when you shoved it into the slot and it started to play.

It almost (but not really) outweighed the songs broken over two circuits of the tape loop, everything being rearranged to make it fit properly, and the crosstalk between programs when your playback heads got out of alignment.

Kraftwerk on 8-track? The mind boggles...!

i had one of those tape players that looked like a dynamite button. i played all my cowsills on it.

Ah, yes, the fabulous Panasonic "detonator." You should have saved it!

I had that Kraftwerk album back in the day. I had a bunch of hostile Iranian neighbors, and man did they get a snootful of those tunes!

Ah, 101 Strings! They managed to make air pudding out of many a hit single.

Where are they now?