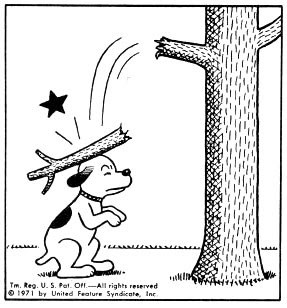 Ernie Bushmiller's Nancy had a shaky start: she was originally introduced as a Cousin Oliver-like latecomer in the Fritzi Ritz strip in the 1930s. At first she was more or less just simply somebody for Fritzi to talk out loud to. Those more familiar with the later "classic" Nancy and Sluggo gag comics may be surprised to hear that Fritzi Ritz was a serial strip, a continuing story, so that Nancy at first was part of an ongoing comic soap opera. When Bushmiller later eschewed continuity for a stand-alone "gag a day" format, his drawings seemingly crystallized in response, becoming almost inhumanly perfect in every way. All the formerly fussy backgrounds became starkly diagrammatic, and the whole strip became something like a series of Mondrians with punchlines. Nancy and Sluggo is the immaculate lawn of American modernism, almost semaphoric, like Atomic Age hieroglyphics with bows and slot noses. It's hard to see how Charles Schulz could have arrived at Peanuts' radical minimalism without Bushmiller's example.

Look again at the panel up top. It is just perfect. That's as well a filled rectangle as any other artist made during the entire 20th century.
Posted by Peteykins at 6:42 PM