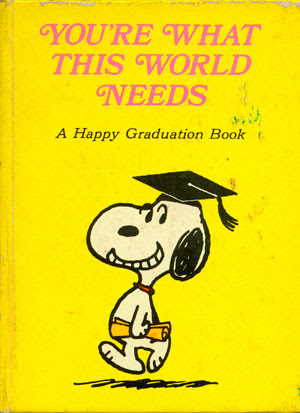 My family, like most in the late 1960s and early 1970s, was just bonkers for Charles Schulz' Peanuts. We had Peanuts merchandise everywhere: felt banners, dolls, Colorforms™, posters, etc. The English Bulldog we acquired in 1965, when I was an infant, was named Linus. I still love Peanuts, and I've been methodically buying Fantagraphics' magnificent reprinting of the strip's entire run.

One thing that's striking about rereading all the Peanuts strips is really what a downer it is. Schulz' act of alchemy was this: combining anxiety, frustration, depression and obsessive-compulsion with incredibly cute, funny drawings to make the medicine go down. And here's what often makes Peanuts merchandise so weird: all the anxiety, frustration and depression goes out the window. So in the strip, all the characters are neurotic and delusional, but on the greeting cards they're all happy, happy, happy!

Above is a little, thin, 3"x4" hardcover mini-book/greeting card by Hallmark which I gave to my brother in 1977 when he graduated from high school (I stole it back later). It's pretty lightweight stuff, natch. The characters are shown against a garish orange background, which is as anti-Schulz as the wonderful typestyle used for the cover.

But it's still, after all, Peanuts, so it's hard to keep out all the negativity. Here's my favorite page, rendered absolutely bizarre by its decontextualization: 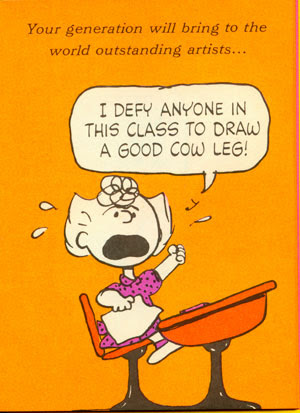 So weird! Out of all the panels and drawings they had available to them, Hallmark chose that. Aren't you glad?
Posted by Peteykins at 7:24 AM

this may be my new catch phrase to use anywhere "I defy anyone in this sushi bar to draw a good cow leg!"