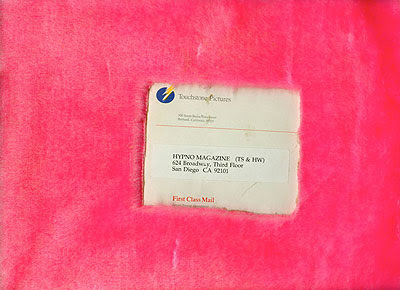 When I was art editor/staff writer for Hypno magazine in San Diego, I got a lot of interesting mail: press releases, freebies, belts, leather chaps (!), CDs, books, you name it. This was one of the most delightful and creative, press materials for Ed Wood sent in a pink, faux fur mailing envelope. I love the idea of this thing brightening the day of hundreds of mail carriers. Here's a picture of the front cover of the folder inside (all below can be clicked for larger versions): 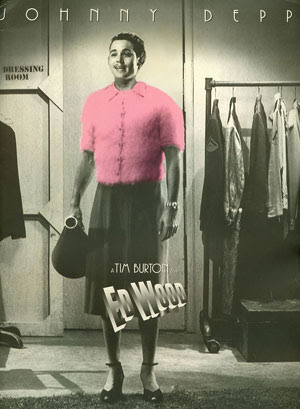 I did enjoy Burton's movie, although in my review I said that in concentrating on Wood's giddy enthusiasm, missing was any indication of the sting of failure the hapless director must have felt; he simply couldn't have been so cheerful all the time; he must have had several dark nights of the soul, as it were. Since then, I've come to like the movie a lot more, impressed more by what it is than what it isn't. Frankly, I think Tim Burton is a tremendously overrated director. I feel like he's always holding back his weirder and darker visions, sacrificing them to achieve a commercial product.  Think of how great Charlie and the Chocolate Factory could have been if it had less Disney, more Dahl! What a missed opportunity. A great example of this can be found in the extras on the Ed Wood DVD, a scene where Bill Murry sings a song while moving through a meat locker of hanging carcasses. The scene is bizarre and wonderful, and ended up on the cutting room floor, a superb casualty to cooler heads prevailing. Tsk.

Below are some of the stills from the press kit: 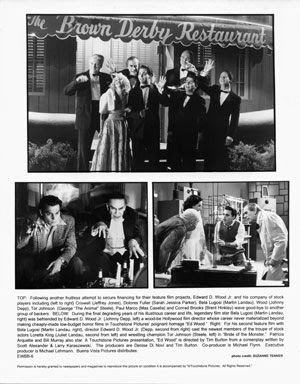 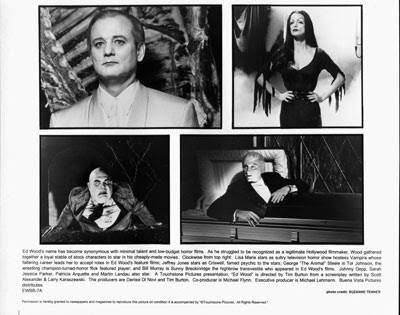 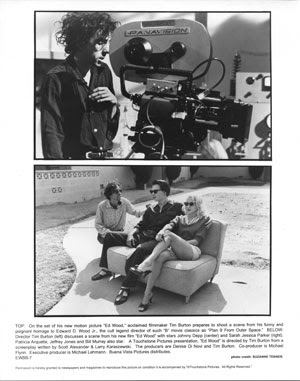 As for Ed Wood's own movies, I endorse them wholeheartedly. Like many who came of age in the 70s and 80s, I used to subscribe to the idea that I liked things that were "so bad they're good." Over the years, though, I've come to object to that idea, and I've tried to train myself out of this thought process. I don't like Ed Wood's films because they're bad; I like them because I think they're great! They're engaging, entertaining, surprising, weird, original, fascinating, hilarious... these aren't "bad" things, these are good things! The "so bad it's good" mindset comes from a standpoint of condescension, a feeling of embarrassment for enjoying something which doesn't live up to conventional standards of "quality." But you know what? I couldn't make a better movie than Plan 9 from Outer Space. Could you?
Posted by Peteykins at 6:55 PM

I think Burton enjoys creating some kind of tension between Disney and darkness but when it comes to Ed Wood's work I couldn't have put it better.

Plan 9 From Outer Space was genius.